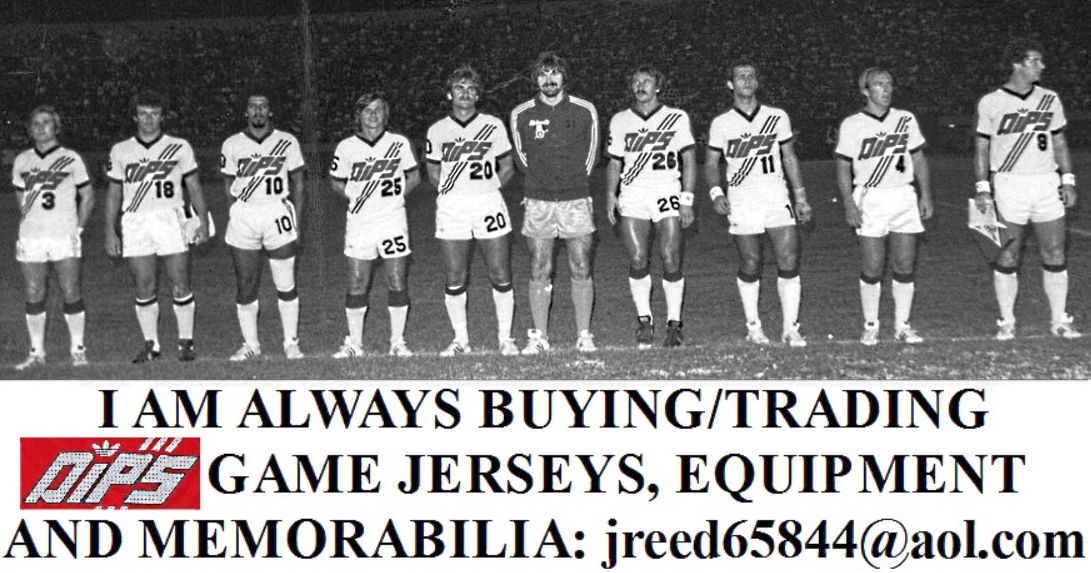 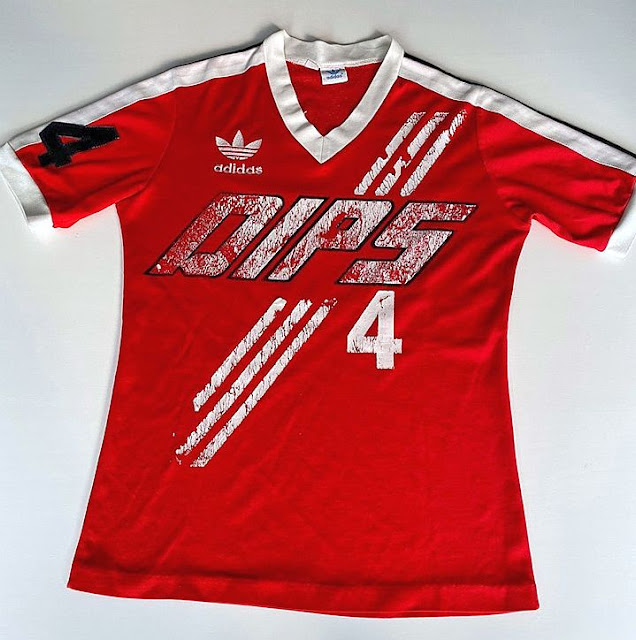 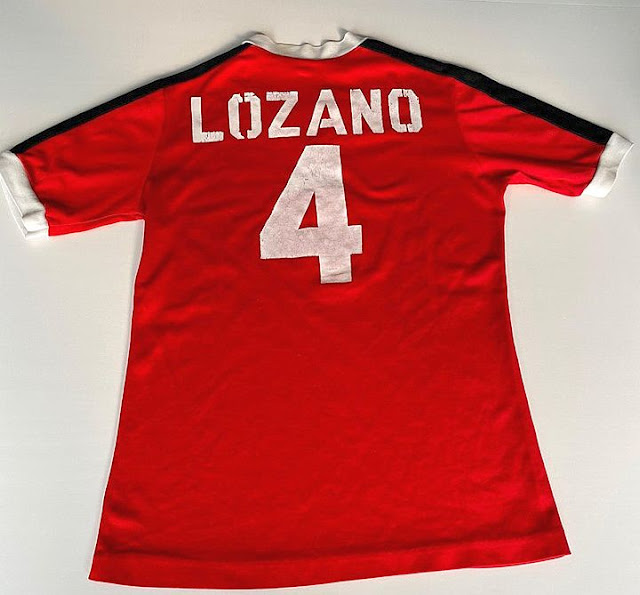 August, 1978, Article on the Diplomats Turn Around from Soccer Digest 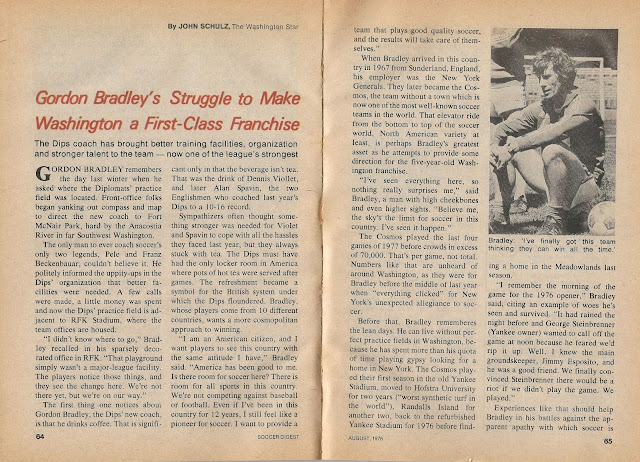 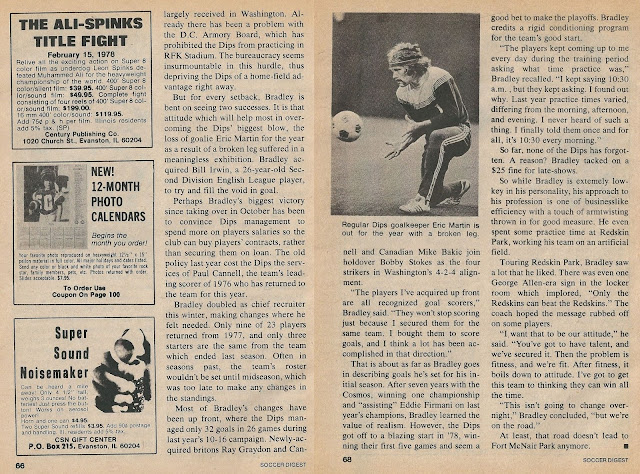 Monday, June 1, marks the 40th anniversary of Black Sunday, when Referee Toros Kibritjian conspired with Linesman Gordon Arrowsmith to rob the Diplomats of a nationally televised win over the Cosmos by taking 2 goals away from the Dips.

Special thanks to Ed M. for sharing photos of his Bill Irwin gamer!

I recently communicated with Kenneth Mokgojoa and asked him if he had any particular story that stood out from his days with the Diplomats. Expecting to get something related to a match, he sent this:

“Jim, the story I remember is that it was after the night  game in Washington against the Tampa Bay Rowdies and we indulged in drinking after the game (1979, the Dips won 5-1). I opted to take one lady at her home after the party. I had enough to drink. What happened next, I was driving on the wrong side of the road. There was a car coming in the opposite direction and it overtook me. We nearly hit head on!

What followed was a police siren. It stopped me and gave me a test to see how much I had to drink. I tried to plead with them, telling them that I am an international player for the Washington Diplomats. They could not take my story and locked me in jail. The following day I went to court and I pretended that I could not understand English. I didn't answer any questions and there was no one who understood my language. That is how I escaped severe punishment. Although my driver license was suspended, and I was referred to the Alcoholics Anonymous organization!” 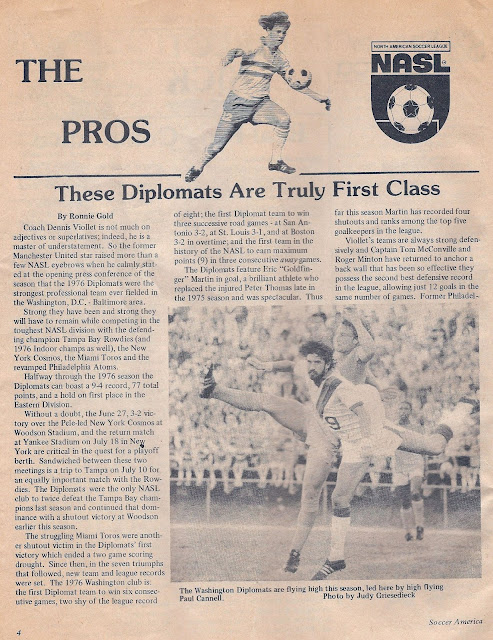 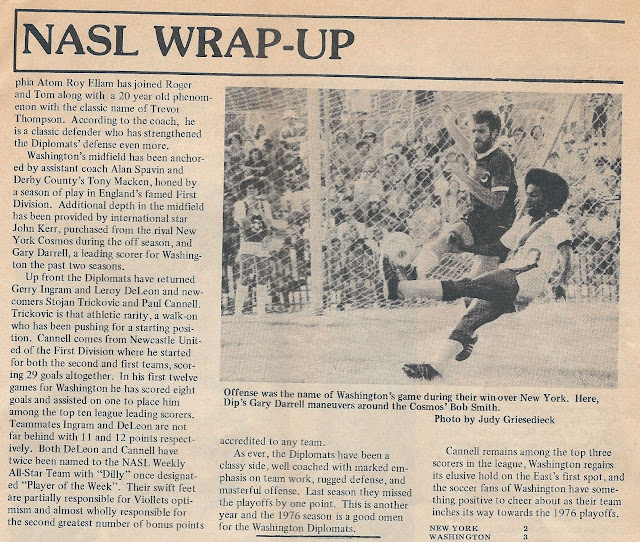 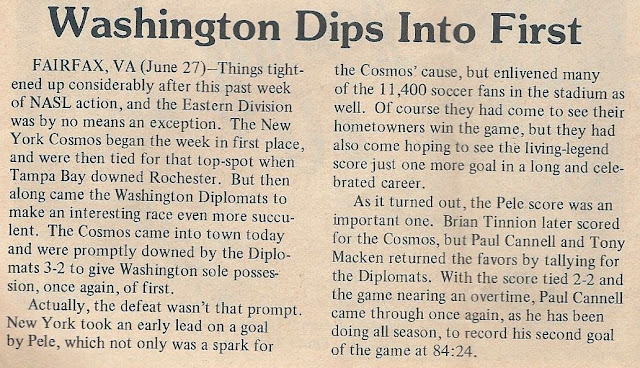 Looking Back and Catching Up With Sonny Askew

There was never a question if Sonny Askew had the potential to play soccer professionally. Before he ever played a match on that level, Diplomats Coach Dennis Viollet stated, "Sonny is the most skillful American player that I have ever seen." Describing his youth in East Baltimore, Maryland, he recalled a typical day. "Play soccer. Come in. Eat dinner. Go out and play soccer again. That was my life."

The competition he was playing against was not what you would expect. In middle school he would join pickup games with the likes of Roy Willner, Dennis Wit and Pete Caringi, all substantially older  than Askew and all three would go on to play in the NASL.

After his break-out season (1979) in the NASL, Askew received high praise from non other than Giorgio Chinaglia. "I can only think of three (Americans) who have shown signs of achieving greatness: Ricky Davis and Gary Ethrington of the Cosmos and Sonny Askew of Washington." Receiving such a compliment from Chinaglia was especially impressive in that the Italian had stopped talking about himself long enough to mention someone else.

Askew played 338 minutes his rookie year (1977), contributing an assist. That year was filled with front office drama for the Dips, however. Coach Dennis Viollet was fired about half way through the season and replaced by Alan Spavin, who would now serve as player and head coach. Spavin was not kept on as coach when the 1977 season ended, and now Askew would be playing for his third coach as a professional in less than a year.

That new coach was Gordon Bradley, who had a long career playing in Britain before coming to America to play for, and eventually coach, the New York Cosmos. Askew made the club in 1978, but he did not fit into Bradley's immediate plans.

In fact, once the '78 pre-season ended, Bradley paid Askew scant attention. I didn't play a second the whole year. I didn't even sit on the bench or dress during matches. During games, I'd sit in the  stands." So what was the problem? One Hungarian coach described Askew as "too much the dribble boy."

Bradley explained the situation a bit more succinctly. "If you don't know what you're going to do with the ball when you get it, then you're already taking a step backward. There were times Sonny held up plays during a game while he thought about his next move." The coach's solution? Send Askew to Scotland for a season to play, and learn, the European way. Askew's teammate, Paul Cannell, knew it would be beneficial. "You try something fancy over there," he said, "you pay. It's a man's game, you know."

Askew scored two goals in Scotland, and most importantly learned to keep the ball moving on offense. "I got back from Scotland and went straight to Florida for preseason training camp with the Diplomats," he recalls. The Dips coaching staff, Gordon Bradley and his assistant Joe Mallett, were more than pleased with what they saw. Bradley gushed, "Sonny has gotten stronger and more aggressive. He's improved 75 to 80 percent in one season. Mallett echoed, "we had no idea Sonny would come back so improved. The chances of him playing a lot this season are very good."

Askew would go on to score 8 goals and assist on 6 others, giving him 22 points and a professional credibility he had never known before. During that 1979 season, Gordon Bradley began referring to Askew as "our bread and butter player."

As the hype for the 1980 season escalated, many expected Askew to play a central role in the Dips "dream" midfield, which would also include new acquisitions John Cruyff, Wim Jansen and Juan Jose Lozano. Askew started the year picking up right where he left off in 1979. He scored 2 goals in the Dips home opener against the Philadelphia Fury, leading his team to 3-1 victory. The magic of 1979, however, was not to be repeated. Askew suffered several injuries and was eventually benched due to the influence and manipulation of Cruyff. The team ceased business operations in December of 1980, leaving Askew to find greener pastures. He played for the Montreal Manic, Team American and Tampa Bay Rowdies over the next few years before the North American Soccer League went out of business.

Today, the angelic-looking Askew, as one reporter once called him, works for an environmental company and plays as much golf as he can. He is still active in the soccer community and will always be remembered as a fan favorite with the Diplomats faithful.

Although his most successful season on the field was in 1979, Askew fondly recalls two stories from his rookie year of 1977. The first happened in Las Vegas, where the Dips were scheduled to play a preseason game. Askew and his roommate, Roy Willner, decided to use their food per diem of $27 to go see Frank Sinatra at Caesar's Palace. Both were excited to see the Chairman of the Board, until they found that the show was sold out.

The second tale tells how Askew got to share the field with Pele at the Meadowlands in New Jersey.
It was August of 1977, and Pele had already announced this was to be his final year playing. Sonny explains, "We were playing the Cosmos in the Meadowlands and it was Pele’s last season. It was my first year and I was worried this would be the only time I would be able to be playing on the same field as Pele. A player really shouldn’t ask the coach if he could go in. But I went up to Spavy (Head Coach Alan Spavin) and tapped him on the shoulder.

'Alan, were down 8-2 and there are only 15 minutes left in the game. This might be my only chance to play against Pele.' He looked at me and said go warm up. When I got in, I was playing forward on one end of the field and he was playing forward on the other end, but I left where I was supposed to be and marked him!” 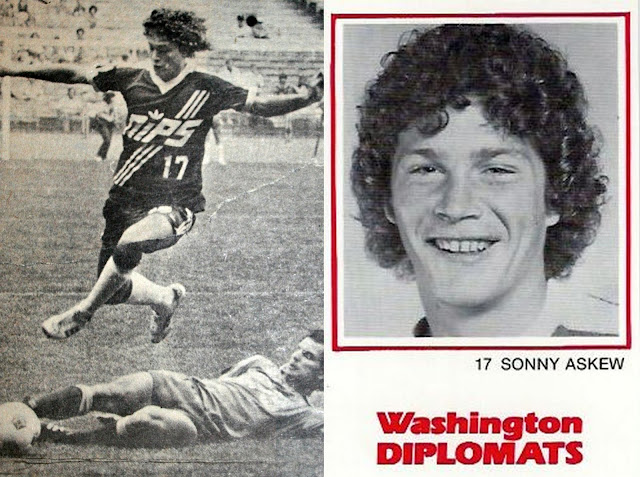 I can be reached by email at jreed65844@aol.com
If you have any Dips mementos or memories you would like to share, please feel free to send them.

A  companion site to the Dips Blog is now running. You can visit it by going to  http://washingtondiplomatsnasl.weebly.com/  anytime. It con...

Growing up in the DC area during the 70s, the Dips were the only game in town during the summer months. Their evolution from playing at a suburban Virginia high school to RFK Stadium was both exciting and maddening from a fan's point of view. No other team would send players to local malls trying to drum up an audience. Yet the players who made these appearances were always friendly and glad to talk to a kid who idolized professional athletes.